Most people in Letcher County grow up knowing that you’re not supposed to get in the creeks, and if you do, make sure that you wash off real good. This is good advice and the major problem here is raw sewage.

Many people assume that raw sewage is just unpleasant — that it smells a little bad and that streams are an okay way to dilute it and move it on downstream.

Untreated or poorly treated sewage is full of pathogens, disease-causing bacteria, viruses, & microorganisms that can have very serious consequences. E. Coli, Hepatitis A, and Cholera are just three of the most well known risks that come with raw sewage. It doesn’t take a microbiologist to imagine the kind of problems that can occur if someone with an open cut or a weak immune system got some nasty creek water onto them.

Where does it come from? 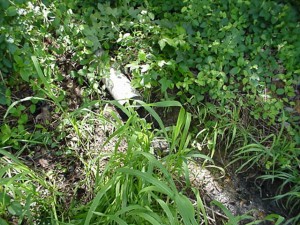 Much of the sewage in creeks here comes from “straight pipes,” which take wastewater from homes and dump it straight into the creek.

Failing septic systems are also a problem. A septic system may be old, improperly maintained, or poorly installed, or it may be installed in clay soil that doesn’t “perk,” meaning it doesn’t allow sewage effluent to soak up in the ground. System such as these result in just as many pathogens entering the water as straight pipes. Septic tank owners should make sure to have an inspection and pumping service done at least every ten years.

It’s true that pets, livestock, and wildlife can also cause pathogens to enter the streams, but in Letcher County this is not the major cause of the problem.

Quite simply, sewage has to be treated.

There are many ways to treat sewage but the two most common are:

The Need for Public Sewer

According to the Kentucky River Area Development District, approximately 2,121 Letcher County homes are currently served by public sewer out of a total of 11,405 homes counted in the 2000 census. Sewering 9,000 homes spread over a mountainous area is a massive task for the engineers and people seeking funding. Solving the pathogen problem will take hard work and creative thinking.

One exciting and successful alternative sewage treatment system has been built by the Letcher County Water and Sewer District for the old coal camp houses at the mouth of Millstone Creek. Twenty-one houses had been built very closely together leaving no room for septic leach fields. For decades, all of these houses had no choice but to dump their waste into the North Fork of the Kentucky River. In 1997, a peat system was designed and installed to treat the effluent from these houses and release clean, potable water into the river. This has been an effective solution that should be used as a model as the Letcher County Water & Sewer District moves into the sewer phase.

Most responsible Letcher County citizens have no choice but to spend a few thousand dollars and have a septic professionally installed and maintained. It’s true that this is an expensive investment, but it should be done properly without taking shortcuts that can endanger the health of your neighbors.

Also in Letcher County, low-income homeowners may apply for the

100% of the costs will be covered for a new septic system or to hook onto public sewer if the following requirements are met. 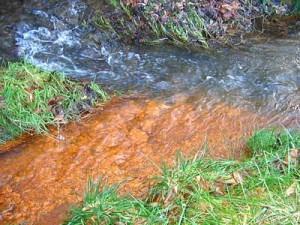 A drive around Letcher County will bring you to many streams in which the bed has an bright orange or a milky white coating… This is a result of Acid Mine Drainage (AMD).

Acid Mine Drainage devastates aquatic life and brings potentially toxic metals into our waterways. High levels of Iron, Manganese, Aluminum and other heavy metals are unhealthy for humans and other animals. The acidic water won’t support fish and the metals that settle out make unsuitable habitat for most bugs.

In addition, AMD is a visual blight. It is an obvious problem that serves as a sign of our region’s environmental neglect, driving away tourists and depressing property values.

Where does this come from?

The chemistry and microbiology behind AMD is very complex, but basically AMD results when iron pyrite (FeS2), often in coal, interacts with water and oxygen to produce sulfuric acid (H2SO4), hydrogen, and iron oxide. This creates an acidic solution and often picks up other metals such as Manganese and Aluminum.

A good overview of AMD can be found on the Wikipedia site.

The AMD sites in Letcher County generally come from old mines that have filled up with water and provide a place where the water can interact with the pyrite and drain out into streams.

The areas of the county where this is the biggest problem are Sandlick, Dry Fork, Crafts Colly, Colson, Hemphill, & Smoot Creek. There are streams that have had problems for a whole generation and should be cleaned up.

The site that the Head of Three Rivers project has focused most on is near the Parkway motel, off Ky. Highway 15, just north of Whitesburg. Click below for more info on this site and ongoing work.

AMD can be treated through two main methods, passive and active. Active treatment involves regularly dosing the water with things like powdered lime to raise the pH to a normal level. Passive treatment involves engineering systems to create areas where the metals can settle out and the water quality can improve before the AMD enters streams.

The closest example of an AMD treatment system can be found at the UVA-Wise Wetlands Project on the campus of UVA-Wise in Wise, VA.

Every time it rains lots of the creeks start looking like rivers of chocolate milk. That mud is sediment runoff and we’d all be a lot better without it…

And large-scale sediment runoff is not natural. If you visit a watershed that’s in good shape such as Bad Branch Falls or Big Everidge in Lilley Cornett Woods the water flows clear even after big rain events. In these places the forest and soil act like a sponge absorbing the water and slowing it down so that the water doesn’t wash away as much soil…

Where does this come from?

Sediment is ubiquitous and hard to control and enforce. If more Best Management Practices (BMPs) were used and sediment control was considered more important, progress could certainly be made. But at this point there is no enforcement and no clear way to measure sediment pollution. A program to measure sediment pollution and government enforcement would be very helpful to improve streams in Letcher County.

Litter is the glaring example of our neglect for our streams and general environment. When a stream is full of trash is shows that the people in that watershed don’t really care what goes in the stream.

Litter is primarily an eyesore but it also points to the fact that the stream is neglected. Litter drives away tourism and leads to people accepting that the streams are nasty.

In some cases litter impairs the flow of streams causing more flooding.

Where does it come from?

Litter comes from roads, houses, dumps — everywhere that trash isn’t properly disposed of. And anytime it rains it pushes that litter a little closer to the stream.

In the mid-1990s the Letcher County Fiscal Court instituted mandatory garbage pickup at all homes in the county. This has led to a noticeable drop in the amount of trash in the streams. In fact, much of the trash that is beside the stream today is 20 or 30 years old.

This is an example of how cleaning up trash while it’s still on the land can improve the health of the stream.

Existing litter should be cleaned up and more should be done to keep Letcher County clean.

A great way to do this is to have annual litter cleanups in local communities. Currently the county government is offering $100/mile (up to $500) to groups that are willing to go out and collect trash